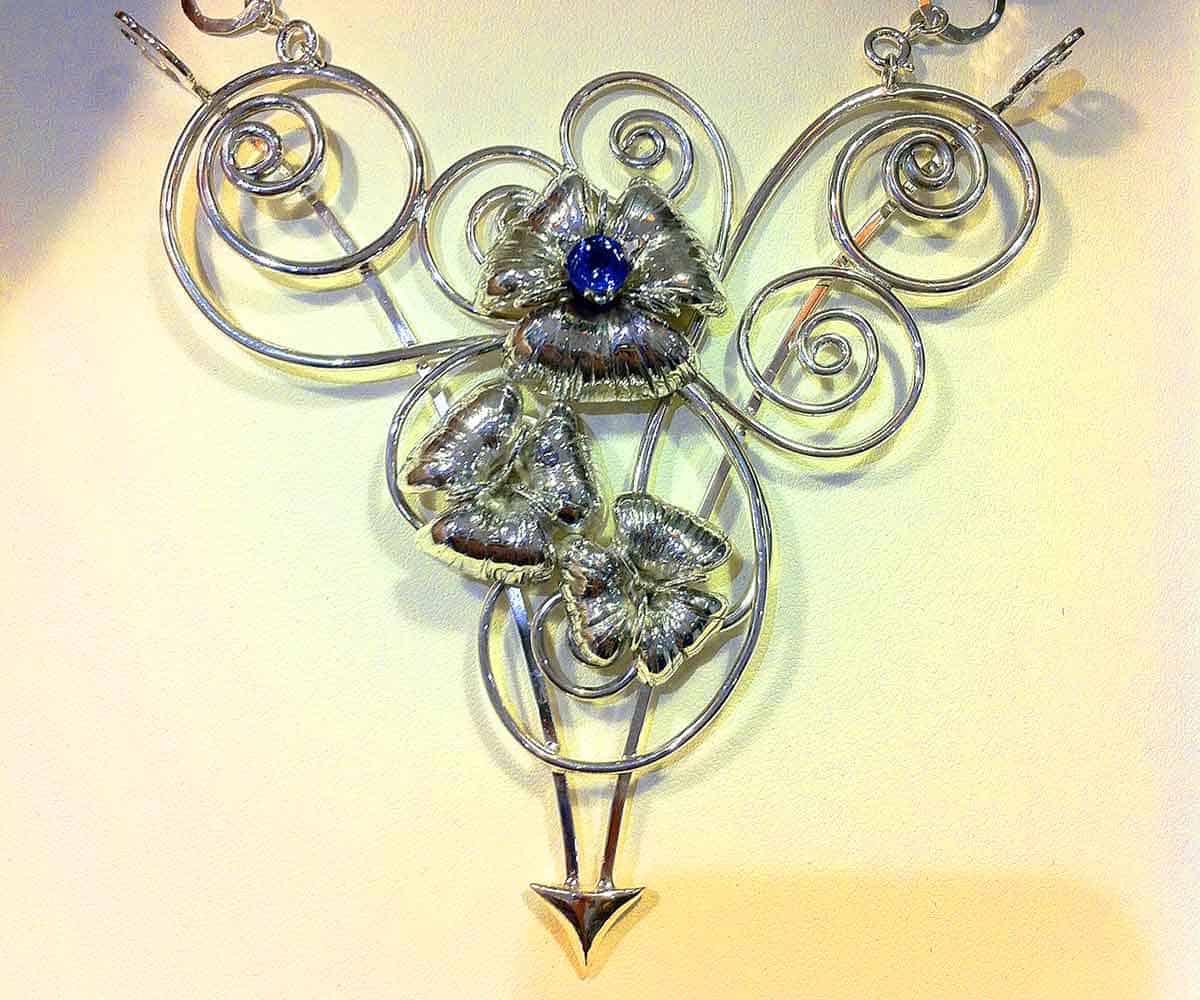 This large pendant and chain was a Christmas present for a friend.

…Her husband Ian had proposed in Kenya so some sort of discrete reference to Africa was requested by him as a surprise, and as Di loved Tanzanite (her engagement ring was Tanzanite)… so that was the stone of choice.

Unlike the pendant itself, stone size was kept relatively low (1.3 ct) to keep the cost from being astronomical. Anyone who knows Tanzanite will understand the value of high quality stones like this one.

Di gave me a great deal of control in the design by keeping the requirements short and sweet; “Three asymmetrical flowers”, … That’s just about it! she wanted to see what I could produce rather than what she could make me produce.  I don’t know if I ever thanked her for having so much faith in me. …Yes that is a crude drawing, I often ‘offload’ ideas onto paper like this to make room for other less crucial thoughts such as talking, walking and going to the toilet.

Started off as five petals, ended up with three… Not really sure why, but I do prefer the stronger look of three; there is continuity also as in my mind the piece as a whole is already becoming triangular. …I never quite settled on these flower petal sections, even though they were all individually cast from carved wax models. When so much time goes into making something, as you can see from the next picture  its hard to let go as I even try them out as part of the chain. But you still have to experiment and take a few risks.

(Love the pattern of the wire here, simple but effective and with the big bold flower in the middle, with a bit more detail it would have made a great pendant… still might) A new flower rises from the ashes, well in wax form anyway.  This first one took  about two hours to whittle, I remember being very pleased with it;  I could have eaten it. Its not supposed to be any particular flower, despite doing a fair bit of research (apparently Tanzania has a thriving flower industry!) that’s just how it turned out. Funny how some good whittling produces the goods, even if the goods aren’t what you thought you were getting!

Once I had three flowers I spent a long time trying to find the perfect arrangement, this one wasn’t asymmetrical enough… Really liked this arrangement, but preferred the flowers to go from large to small. …Same thoughts here and too straight. I had settled on the design of the spirals of silver wire I’m resting the flowers on at an early stage, that detail could have gone anywhere really, with endless variation. But at this point I started feeling it was too fluffy; too …safe. The impact just wasn’t there, it had to be woken up. Sharpened!   The curls and swirls are great, easy on the eye, natural looking, asymmetrical yet balanced; but I couldn’t help thinking… ‘is this sexy enough?’  So there was nothing else for it, I applied a cleavage loving  ‘V’ ending in a little pointy devils tail. et voilà, we have a green light from the ‘sexy-meter!’

Also the flowers had now been cast in silver and polished, still not found that magic arrangement though. Getting there but the stone should really be in the middle. Finally the arrangement I’m happy with!   Good picture for a sense of scale here, that mug is bigger than average but the mouse mat is useful… the pendant just about fits edge to edge.

Also in this pic is an early version of the chain that didn’t make the final cut. This is one of the two sneaky little elephants included in the design to symbolise Africa as requested; I loved making these little guys, so much so I made my niece another one as a charm.

The holes formed by the elephants trunks were originally going to be the point where the chain attached but in practice they are to far apart causing the chain to hang straight down from the neck (yes, I tried it on and it didn’t look right at all… Yes! Of course I had my dress on!) so I opted to move the point of attachment two inches closer to the middle. This picture shows more detail of the centre flower and the stone, I love how the blue of the Tanzanite is really vivid here, just as it should be. The stone is held in place by a purpose made ‘stamen’ or ‘stigma’ (its Di’s flower – she can call it whatever she likes) that has three prongs, they were designed to hold the stone in place while obscuring it as little as possible. The prongs used to be quite long and protruded from the flower by a centimetre or so but I thought Di might accidentally injure herself on them so they had to be shortened.

The flower petals polished up really nicely, the lines running to the centre of the flower were done using a fine file and I think give it a natural fleshy look. There are imperfections in the cast (as there often is with the casting method I use) which would normally all be removed but helped with the overall effect on these petals so I left a few in. Here we have the completed piece in its wooden gift box. The chain was the last part to be assembled, made from 1 mm thick sterling silver wire made into rings and soldered, hammered to give them texture and hammered again on a sand bag to produce a slightly concave shape which helps to make the reflected light more interesting and hopefully make it more comfortable to wear; then the rings are cut again, then linked together and re-soldered to form the chain. Then finally hand polished.

The necklace is connected to the chain using spring clasps so the chain can be removed and worn separately. Although delivery has been made and I know Di  loves this necklace/pendant as it is, I struggle to ever see any piece I make as being actually ‘finished’! I’m always thinking of alterations and extras that could be done to whatever it might be… So Di, if you ever get bored of it you know where I am. Wink! 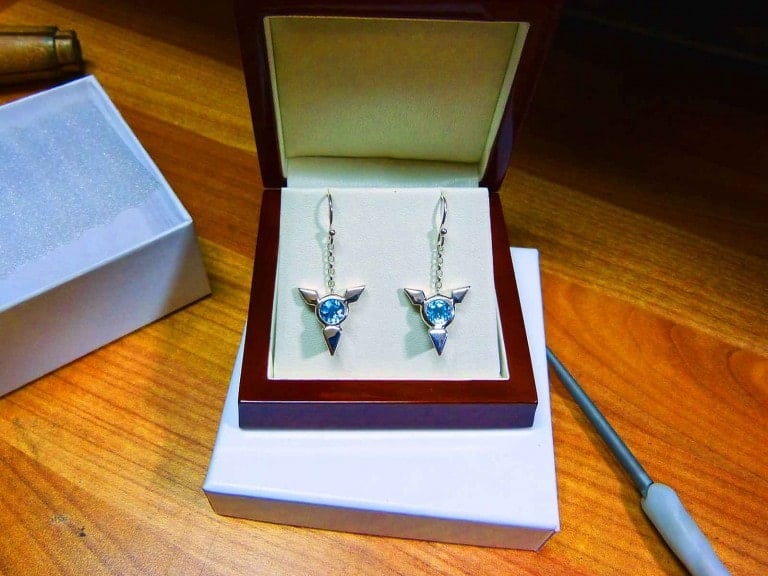 “…Why not put more detail into the wax model if you don’t want to file then Pete? ..I hear you ask. Well, there is a …” 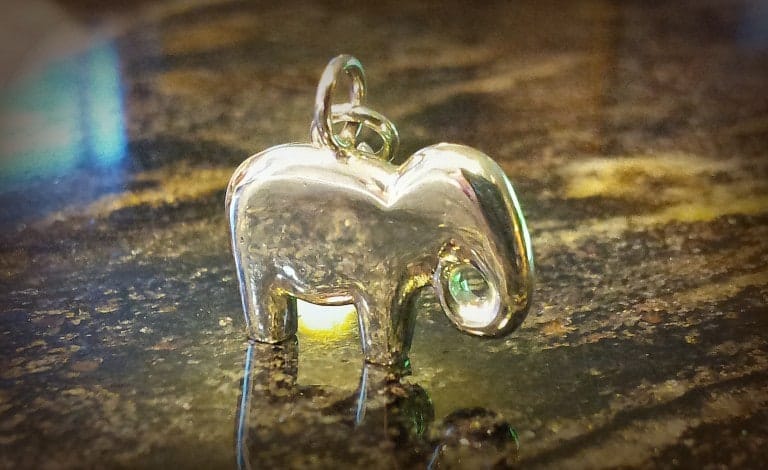 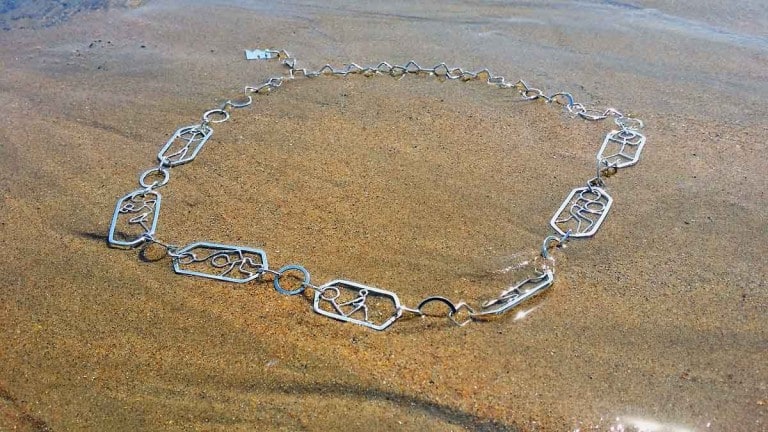 These little guys are Sterling silver – they come as a pendant (comes with the chain) or a pair of earrings (comes with earring hooks). 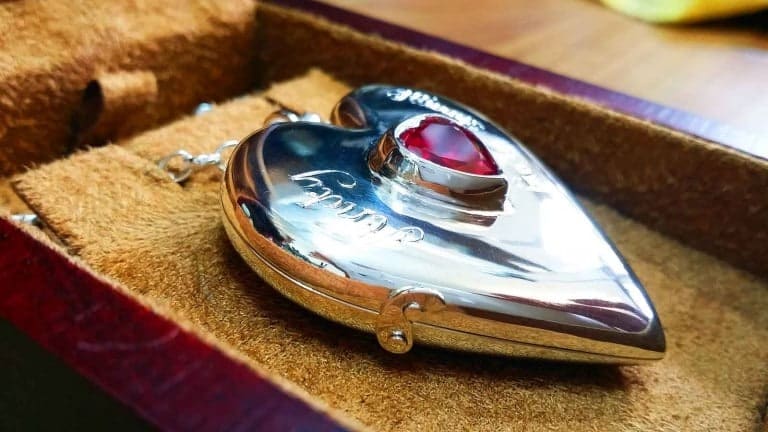 “…Love this little paw print, it will get better with age as the recessed parts oxidise making the raised pads stand out even more…” 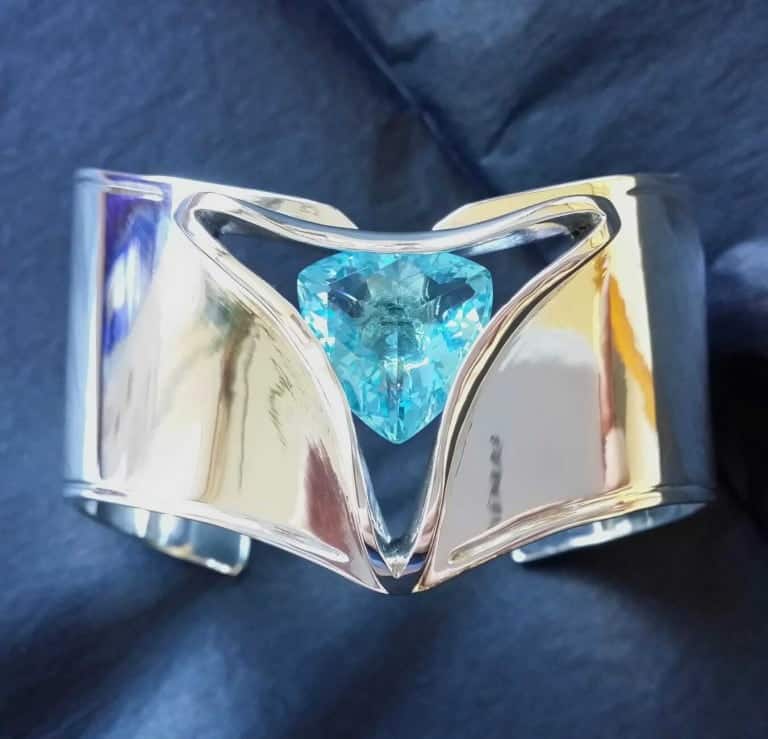 “However, adding more metal at this point would have pushed the weight to medieval torture levels… “ 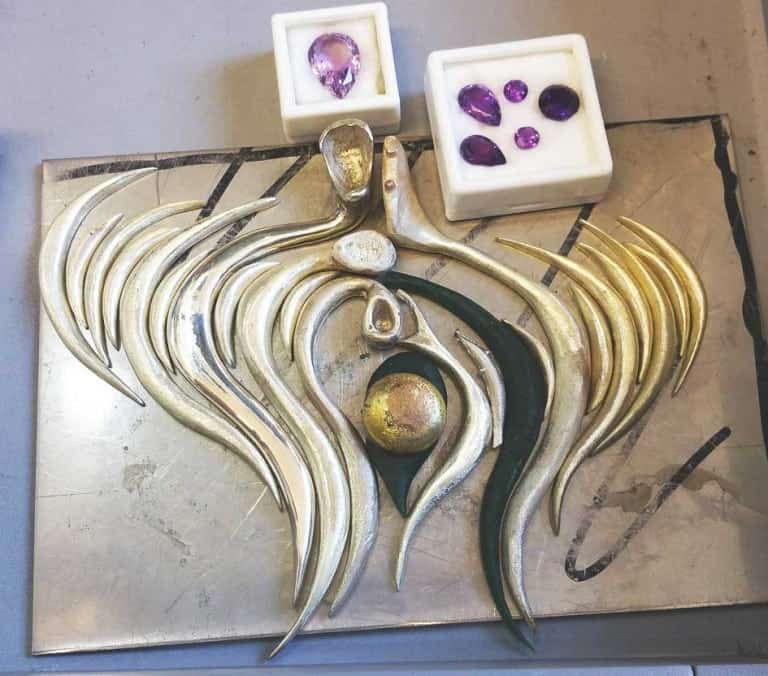 I’ve always said I’m not keen on making small dainty jewellery, might be pushing the limit with this one! – However, I’m certain that if you make a necklace like this fit the wearer perfectly it will feel comfortable. Maybe not for a sprinter, and a hurdler would definitely have sore shins but for an…

We use cookies on our website to give you the most relevant experience by remembering your preferences and repeat visits. By clicking “Accept All”, you consent to the use of ALL the cookies. However, you may visit "Cookie Settings" to provide a controlled consent.
Cookie SettingsAccept All
Manage consent

This website uses cookies to improve your experience while you navigate through the website. Out of these, the cookies that are categorized as necessary are stored on your browser as they are essential for the working of basic functionalities of the website. We also use third-party cookies that help us analyze and understand how you use this website. These cookies will be stored in your browser only with your consent. You also have the option to opt-out of these cookies. But opting out of some of these cookies may affect your browsing experience.
Necessary Always Enabled
Necessary cookies are absolutely essential for the website to function properly. This category only includes cookies that ensures basic functionalities and security features of the website. These cookies do not store any personal information.
Non-necessary
Any cookies that may not be particularly necessary for the website to function and is used specifically to collect user personal data via analytics, ads, other embedded contents are termed as non-necessary cookies. It is mandatory to procure user consent prior to running these cookies on your website.
SAVE & ACCEPT
0